Like my FaceBook status said the other week, "What else do you do for your 14 year wedding anniversary but go to a Burger & Beer Festival"!
And that is exactly what we did this past Saturday.  It was a great day for it too finally the rain had stopped and the sun was out.
This was the second year that this festival has been put on.  A wonderful idea, proceeds went to the Sanneh Foundation  for inner city children.
The event was the 2015 Twin Cities Burger Battle.

To start the evening off we went to 612 Brew, that was our second time there we went right after they opened and the brewery was not even completed at the time. we had a Groupon :)

This past weekend was Art-A-Whirl basically art, drinking and music all over NE Minneapolis.
So this part of the city was hoppin'!

We only had a couple blocks to walk to get to the Burger Battle, I said to my husband "oh the line is not to bad", as we get closer we notice that is the beginning of the line.  Made me laugh pretty hard as we follow the line around the block, I didn't think that line would ever end!

Finally we get to the end of the line, it moved along pretty quickly.

And just a public service announcement people be respectful to others, always!  And DO NOT cut in line!  There were several people behind us and a couple right in front of us and oh 70 in front of them.  This very rude group of 5-7 people just cut into line.  I don't know if everyone was being Minnesota nice but no one said anything.  That got my blood boiling for a little bit but I did not want them to ruin the evening.

Ok enough of that, on to the BURGERS!

Finally we get in and there were tents of different resturant stations lined up in this field, two beer tents and one drink tent. 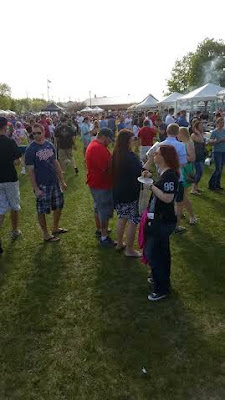 There was a band playing and yard jenga was happening.  Everyone gets one token and you vote for your favorite burger.  There was a people's choice winner and the judges winner at the end of the evening.

If we had a strategy at all it would be not to eat burgers from a restaurant we had already been to.

In total there were 19 burger joints participating in the festival.

Most places gave out mini burgers aka sliders, a couple were cut wedges. 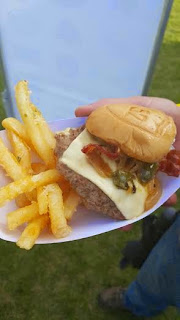 I don't know how honestly fair this competition is because I could only eat 3.  My husband had 7.

I really wanted to eat more but I was so full!

There were not many tables so it was really tricky to eat with a beer in one hand and a basket with your burger in the other.  And taking pictures!? Forgetaboutit,  I only got a few.

And the winners were drum roll please!!!!!

People's Choice Award goes to St. Paul Grill! I didn't try this one :(  Boohoo I'll have to go there now see what all the hype is about!!!!

The Judges chose The Paddy Shack @ The Half Time Rec, who I wrote an article on earlier this winter!

Congrats to the winners!

Oh and my favorite of the evening (that I tried) was My Burger, and lucky for me they are opening up a location close to me soon! 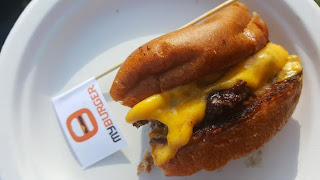 3 types of beef in this scrumptious baby