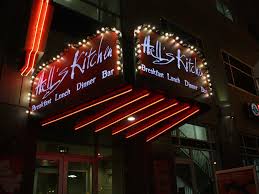 Birthday Weekend Dinner #1 was done at Hell's Kitchen, I actually did not know where we were going, it was hubbies surprise after bringing me to the beautiful W hotel.
Hell's Kitchen was right around the corner, I always wanted to go here, but the Duluth location, but then it closed.
We get there (the downtown location) flashback we had been there before about 16 years ago!  Silly us :)
Got seated in the band area, but got stuck behind the dj.  That's ok we could still hear the music.
I didn't realize how large this place was until we went to leave. 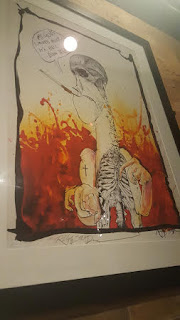 Oh the bathrooms were spooky!  Kidding, you know those pictures that are holographic in all the Halloween stores?  Yeah they have them in the bathroom but even scarier !
It was happy hour we started off with the artichoke dip, YUM! 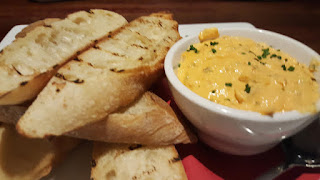 Got a couple beers, I think they were only $2 each, deal!
We were not super hungry so we split the juicy lucifer (lucy, ya you called it, we got the burger).
Good, not the best I've ever had. 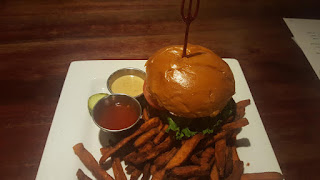 Our server was really good and attentive.
I would totally go here again.
Best part was the bill was about $42 !  Cheap night!